The dump station and showers are closed to anyone not camping at the park. Fire restrictions are in place at the park - no wood, charcoal or propane fires. No smoking except in an enclosed vehicle. 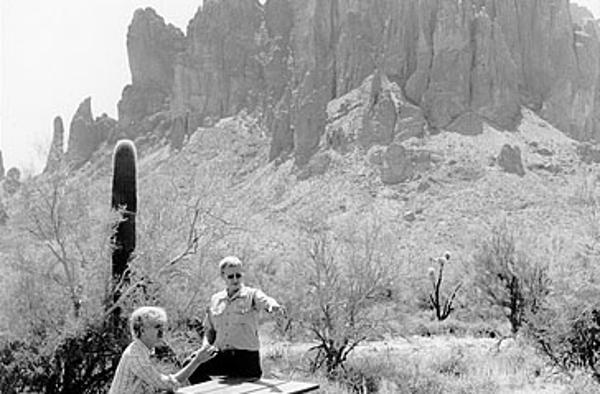 Lost Dutchman State Park is located on the Apache Trail, State Route 88, north of Apache Junction. Highway 88 crosses the northwest portion of the Park, private land is on the south, and the Tonto National Forest on the north and east. The Park provides views and access to the most scenic portions of the legendary Superstition Mountains and maintains facilities to support the recreational activities. The famous tales of the Lost Dutchman Gold Mine are known throughout the world, with travelers from all over coming to seek the legend and experience the mystery. If not in search of the gold, they become entranced with the golden opportunities to experience the beautiful and rugged area known as the Superstition Wilderness accessible by trails from the Park.

The Bureau of Land Management (BLM) developed Lost Dutchman State Park in 1972 as a day use recreation area. The infrastructure for the site included underground utilities, restroom buildings, ramadas, paved roads and parking areas and picnic facilities. The site also had a sewer treatment plant and primary three-phase electrical system. In 1974, Glen Collins of BLM called State Parks and talked with Charles Eatherly, Chief of Planning, whom he had worked with in the past. Mr. Collins offered this developed recreation site to State Parks, if the agency was interested. The agency and the Parks Board quickly decided Lost Dutchman would make a good addition to the system. 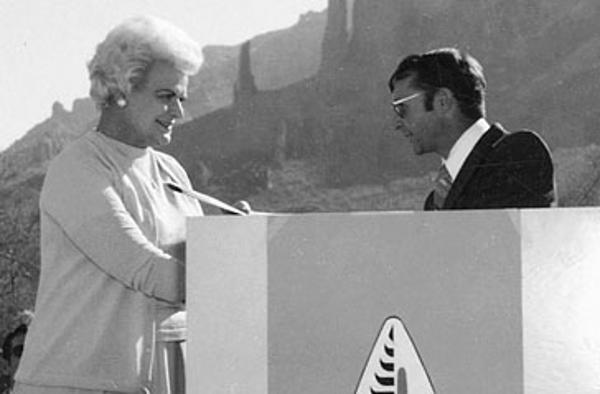 Secretary of State Rose Mofford at the 1977 Dedication ceremony.

The legislation was introduced in the 1975 session to provide State Parks with the necessary funding to acquire the property through the Federal Recreation and Public Purposes Act (R&PP) for $2.50 per acre. However, the agency was not successful in getting this legislation passed to authorize the park and appropriate the necessary funds for acquisition and operation. In the meantime, Congress passed legislation that amended the R&PP Act to allow acquisition of land for recreation use at no charge. The majority of the Park (292 acres) was obtained by an R&PP Patent on September 13, 1977, and formally dedicated as Lost Dutchman State Park on December 5, 1977, with Ron Craig as Park Manager. Michael Ramnes, Director, served as Master of Ceremony. Featured speakers were Rose Mofford, Secretary of State, representing Governor Wesley Bolin, Robert Buffington, State Director, Bureau of Land Management, and Duane Miller, Parks Board. In 1983, Parks acquired an R&PP lease for a 28-acre addition to the Park.

Named after the fabled lost gold mine, Lost Dutchman State Park is located in the Sonoran Desert, at the base of the Superstition Mountains, only 40 miles east of Phoenix. Several trails lead from the park into the Superstition Mountain Wilderness and surrounding Tonto National Forest. Take a stroll along the Native Plant Trail or hike the challenging Siphon Draw Trail to the top of the Flatiron.

Depending on the year’s rainfall, you might be treated to a carpet of desert wildflowers in the spring, but there's plenty of beautiful desert plants to see year-round! Enjoy a weekend of camping and experience native wildlife including mule deer, coyote, javelina and jackrabbit. A four mile mountain bike loop trail has opened at the park – this is a great way to enjoy the park's beauty while experiencing the famed Superstition Mountains!