The dump station and showers are closed to anyone not camping at the park. 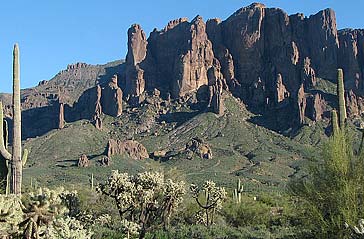 The Superstition Mountains are the product of many natural forces that helped to shape this gorgeous mountain range over a long period of time. The Superstition Mountains are actually the result of intensive volcanic activity. They are composed of welded tuff (volcanic ash cemented under extreme heat), breccia (rock fragments cemented together with lava or welded tuff), granite, dacite, basalt, and some conglomerate. A few gold deposits pocket the surrounding areas. Some 25 million years ago, during the mid-tertiary period, volcanoes in this region emitted about 2,500 cubic miles of ash and lava, the ash spreading as far south and northeast as present-day Florence and Roosevelt Lake. The volcanoes collapsed into their partly emptied magma chambers, producing depressions or calderas. A subsequent up-thrust of thick lava within the largest of these calderas and the forces of erosion have created the Superstition formations that we see at the park today. Thick, alluvial fans spread outward from this eroding resurgent dome. The alluvial material is primarily tuff, dacite, and decomposed granite.

While hiking in the Superstitions, one can sometimes hear rumblings similar to rolling thunder. Geologists say this results from seismic activity resonated by the canyon walls. This could explain the origin of the Apache legend that these mountains are the home of the thunder gods.

Keep an eye out for commonly appearing flowering plants, cactus, and trees and check them off the list below during your trip! The diverse variety of desert plants found within the Superstition Mountains is absolutely mind-blowing!

Photo Permits are required to take photos at the park.

Personal photo permits can be filled out at the park the same day.

Named after the fabled lost gold mine, Lost Dutchman State Park is located in the Sonoran Desert, at the base of the Superstition Mountains, only 40 miles east of Phoenix. Several trails lead from the park into the Superstition Mountain Wilderness and surrounding Tonto National Forest. Take a stroll along the Native Plant Trail or hike the challenging Siphon Draw Trail to the top of the Flatiron.

Depending on the year’s rainfall, you might be treated to a carpet of desert wildflowers in the spring, but there's plenty of beautiful desert plants to see year-round! Enjoy a weekend of camping and experience native wildlife including mule deer, coyote, javelina and jackrabbit. A four mile mountain bike loop trail has opened at the park – this is a great way to enjoy the park's beauty while experiencing the famed Superstition Mountains!