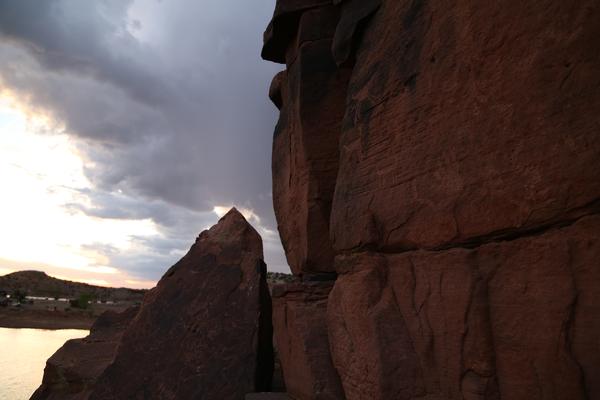 Lyman Lake State Park is located in eastern Arizona near St. Johns at an elevation of 6,000 feet. The park offers cabins, camping, fishing, boating, wildlife watching and hiking trails featuring petrogylphs. The lake is human created and harnesses snowmelt from nearby Mount Baldy and Escudilla Mountain. It is one of the few lakes in northeastern Arizona without any restriction on boat size.

The park has vegetation dominated by pinyon (Pinus spp.) and juniper (Juniperus spp.) and is characterized as Great Basin Conifer Woodland (Brown 52). Other common vegetation in this area include oaks (Quercus spp.), shrubs like threadleaf groundsel (Senecio longilobus) and snakeweed (Gutierrezia sarothrae), and many native bunch grasses such as galleta grass (Hilaria jamesii), ricegrass (used to be Oryzopsis hymenoides has been reclassified as Achnatherum hymenoides), and western wheatgrass (Pascopyrum smithii). Wildflowers include numerous penstemon species, sego lily (Calochortus nuttalli), a number of globemallows (Sphaeralcea spp.), and several lupines (Lupinus spp.)

Like many areas of Arizona, Lyman Lake State Park is also home to non-native plants and animals. These non-native species arrive in a variety of ways; some species have been accidentally introduced and humans introduced some purposefully. Tamarisk (Tamarix sp.) and Russian olive (Eleagnus angustifolia) are two non-native trees found in the park.

The Lyman Lake State Park area appears to have been continuously occupied by the Anasazi sometime after 6000 BC. Based on current understanding of Anasazi culture, they were originally hunters and gatherers, living in small, temporary campsites, depending on seasonal grasses, nuts, berries, and game for food. By the first century AD, they began cultivating corn, beans, cotton, squash, and other domesticated plants introduced from Mexico. Crops may have originally be raised in plots where moisture was dependent on rainfall. Later, particularly after about 1300 AD, floodplain irrigation may have been practiced.

By 500 AD, as the Anasazi became more sedentary, they began developing more permanent, semi-underground dwellings. Totally above surface structures begin appearing between 900 and 1100 AD. These structures gradually become large masonry pueblos that were concentrated along the Little Colorado River near major confluences with other streams. Several large pueblos dating from 1300-1400 AD are located in the Lyman Lake State Park area.

Petroglyphs are very common to the area and can be viewed along the Peninsula Petroglyph Trail and the Ultimate Petroglyph Trail. The petroglyph hike is very popular and occours several times throughout the year. Park rangers will discuss Anasazi culture and other interesting information about the Anasazi people.

The park is open 24 hours a day, year-round

Created as an irrigation reservoir by damming the Little Colorado River, Lyman Lake State Park is a 1,200-acre park that encompasses the shoreline of a 1,500-acre reservoir at an elevation of 6,000 feet. It is fed by snowmelt from the slopes of Mount Baldy and Escudilla Mountain, the second and third highest mountains in Arizona. Water is channeled into this river valley from a 790-square-mile watershed extending into New Mexico.

Lyman Lake is one of the few bodies of water in northeastern Arizona with no size restrictions on boats. The west end of the lake is buoyed off and restricted as a no wake area (5 mph). This allows the angler a chance at a variety of fish without the proximity of speedboats and water-skiers. The fishery consists of walleye, channel catfish and largemouth bass. The large remainder of the lake is open for all other types of water sports.

Lyman Lake really comes into its own during the spring, summer, and fall. Summer days, with temperature highs in the 80s to low 90s, are perfect for fishing, swimming, leisure boating, water-skiing, hiking or just relaxing.