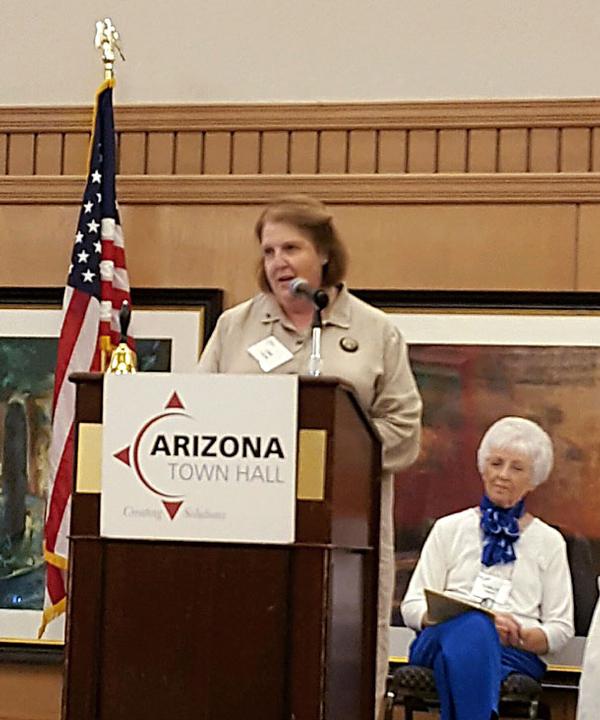 PHOENIX – The Shirley Agnos Legacy Award was given today to Lisa Atkins, commissioner of the State Land Department, during the Arizona Town Hall 2017 Annual Meeting and Summit on Topics.

Held at the Sheraton Crescent Hotel in Phoenix, the meeting was held to capture input from Arizona's diverse communities. The Shirley Agnos Legacy Award was established to highlight individuals who have a record of excellent civic engagement and is based on:

As an Arizona native, Atkins combines a well-rounded understanding of the State with more than 40 years of experience in the federal and state legislative and policy arenas. Ms. Atkins served for more than 23 years as Chief of Staff to Congressman Bob Stump (R-AZ) in both Washington, D.C. and Arizona, 18 months as the Executive Director of the County Supervisors Association of Arizona (CSA), representing more than 50 elected Arizona County Supervisors on policy and budget matters, and 11 years as the Vice President for Public Policy for Greater Phoenix Leadership (GPL), a group of the Region's top business and industry leaders focused on the State's economic growth and vitality.

Atkins is well respected in the Arizona community for her involvement in a variety of organizations. Among her current community activities, Ms. Atkins represents Maricopa County as an elected member of the Board of the Central Arizona Water Conservation District (CAWCD), which is responsible for operating, maintaining and managing the Central Arizona Project. She also serves as an Advisory Member of the statewide Governor's Military Affairs Commission, which is the permanent body to monitor and make recommendations to the Governor and Legislature on executive, legislative and federal actions necessary to sustain and grow Arizona's network of military installations, training and testing ranges and associated airspace. She is also a member of the Arizona State Parks Board.